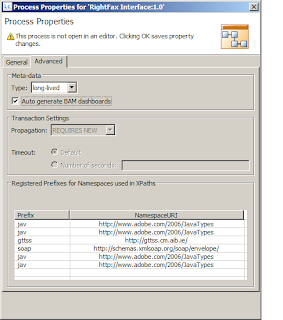 Just in case you are wondering, if the process was open in an editor, the OK button would still be missing which is unfortunate because the dialog box is modal so I have to cancel it in order to save the process in the editor. 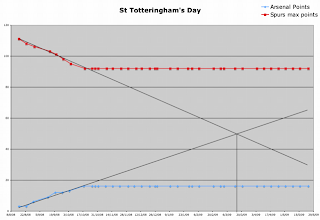 What, you may ask, is Saint Totteringham's Day? Well, Saint Totteringham's Day is the day on which Tottenham Hotspur can no longer catch Arsenal in the league, which is to say the day on which the total points available to Spurs is lower than the number of points Arsenal already have. It's entirely possible that the day doesn't happen in a particular year, if, for example Spurs actually finish higher than Arsenal (mercifully rare, last time was 94/95), or if Spurs are in the wrong league (77/78).

So, this year I am tracking progress towards St Totteringham's Day. As can be seen from the graph, the current projection is in the middle of March. This is probably tempting fate quite badly, so expect to see a massive improvement in the fortunes of Spurs and a disastrous run for Arsenal. However, it also provides me with something to blog about on a regular basis.

Note that the projection currently shows Arsenal with less than 70 points at the end, which would be very bad, and Spurs with about 30, which is well into relegation territory.

A Little Bit of Politics 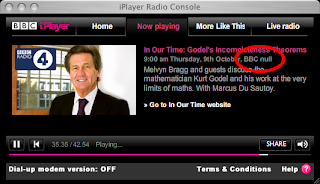 It looks like In Our Time has moved away from Radio 4.

How cool is this!

Naturally, I'm downloading it as we speak. I'll post some screenshots when I have it working.
Link
# posted by JeremyP : 9:35 pm  0 comments